Windswept’s links with the RAF run deep: Brewery founders Al and Nigel are former RAF pilots whose RAF careers brought them to Lossiemouth.

Nigel grew up in Sheffield and joined the RAF in 1991 after gaining a degree in Chemistry at the University of York. Nigel flew Tornadoes from RAF Lossiemouth with various squadrons and served as an instructor with XV(R) Squadron. He left the RAF in 2007 and joined Thales as a flight simulator instructor, training pilots in the Tornado simulator at RAF Lossiemouth.

Al hails from Stornoway and joined the RAF in 1991 as a pilot. Al flew Tornados, Harriers and F-15E’s before finishing his RAF career in 2009 following tours on XV(R) and 617 Squadrons at Lossiemouth. Like Nigel, Al joined Thales as a flight simulator instructor and both still manage part-time roles in the simulator with full-time roles at the brewery.

RAF Lossiemouth is currently home to four flying squadrons. Three of these fly Typhoon aircraft which are on Quick Reaction Alert for any air threats or aircraft in distress. The only Tornado squadron, XV(R) Squadron, disbands on 31st March 2017 after 102 years of dedicated service.

Windswept has produced a beer to commemorate the disbandment of XV(R) Squadron. Its name, MACROBERT’S REPLY, is testament to the Squadron’s most famous aircraft. The first ‘MacRobert’s Reply’ was a Short Stirling bomber, serial N6086 operated by XV(R) Squadron in 1941. The aircraft was paid for by a generous £25,000 donation from Lady Rachel Workman MacRobert, and was named ‘MacRobert’s Reply’ in commemoration of her three sons, all of whom were killed whilst serving with the RAF. Four other aircraft have since carried the name ‘MacRobert’s Reply’, and borne the MacRobert family crest.

The beer is a classic dark amber British ale with a fruity hoppy aroma. Good malt flavour is balanced with fruit hop and a hint of chocolate providing gentle bitterness on the finish.

We have pledged to donate 5 pence per pint of MACROBERT’S REPLY to the RAF Benevolent Fund, the leading welfare charity for the RAF.

MACROBERT’S REPLY is available in 330ml bottle to buy from the brewery and our online shop from Saturday 11th March. Cask for trade customers is available from Monday 13th March. 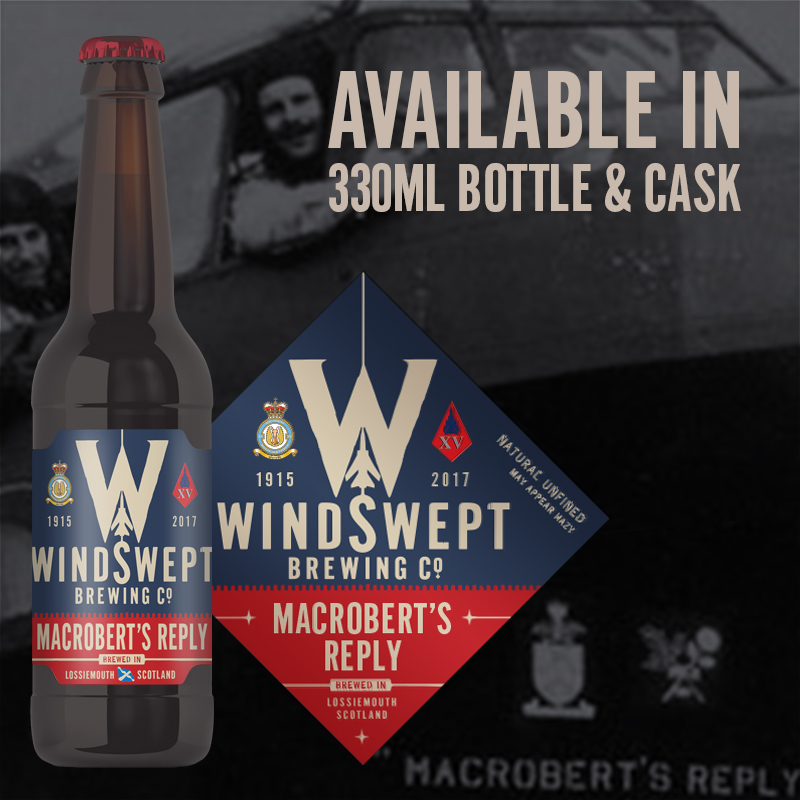