Best When You’ve Earned It Film – behind the scenes

We wanted to create a film that celebrates some of the things we love here at Windswept – getting outdoors, great sport and of course our beer and Tap Room. The first few people to see the film immediately asked where it was shot and who was in it so we thought we would post a behind the scenes lowdown for those who would like to know more.

We think the film captures the spirit of Windswept blending together sport, the stunning environment that surrounds our brewery and our beer with the ‘best when you’ve earned it’ ethos.

Who’s who and where’s it shot?
So we have kept it local – the shoot was all set in Lossiemouth and everyone you see in the film is based up here – with most either working for or with Windswept!

The mountain biking  was shot in Lossie Woods just 5 minutes from the brewery. Our riders were Duncan Johnston, a graphic designer who works regularly with Windswept through his business Bothy Creative and Anna Riddell, who competes regularly throughout Scotland, an Endura Ground Division Ambassador and also runs Ride Out Coaching.

Connor Grady is our runner and also our sales manager – when he is not at work he is usually found running up a hill or climbing a mountain. We wanted to make sure we got some shots of Lossiemouth’s iconic lighthouse and so Covesea beach provided the perfect place to grab some stunning shots of the coastline and also Connor’s running technique!

No Windswept shoot would be complete without our very own Al Read, co-owner of Windswept. He loves to get out on the water and was very happy to don his wetsuit and go for a paddle around Lossiemouth’s West Beach.

Stuart Evans, one of the brew team and night-time rockstar, worked hard all day for the shots of the brewing process whilst still ensuring the APA was brewed to its usual high standards.

Last but not least the Tap Room had to feature Ailsa Morris who always has a warm welcome for everyone who visits here at Windswept Brewing Co.

A big thanks to Scott Remy at Scene It Media who shot and edited the film. 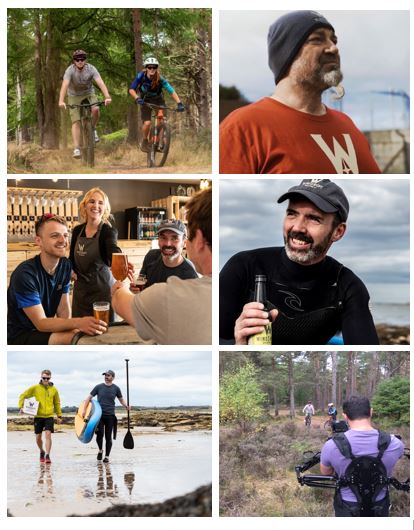